In keeping with my predilection for overly enthusiastic New Year's resolutions I thought I would kneel down and breath the kiss of life into this cadaverous blog.  I think maybe a really slack commitment of one or two posts a month should do it.

Our son is now 22 months old and is a goddamn riot.  We have him in daycare now, which means we've outsourced the job of teaching him to be a human to people who really know what they're doing.  He even speaks a lot of human now, too, like "butthole," and "go away."  It's good to learn those ones early, because he's going to need those his entire life. 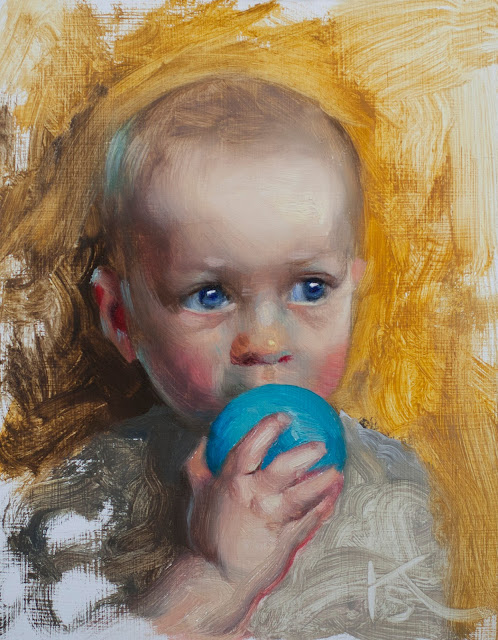 Having a small person who needs you to do things for you is time intensive, though, and my precious Facebook time and yes, even my blog time have been sacrificed.  I think the ideal person to have a child is someone who already wastes a lot of time on stupid stuff.  That would be me.  But even though I had quite a bit of chaff in my schedule to transform into baby care time, I've still been running at a deficit for the past twenty-two months.  And it's okay.  I don't answer emails in a timely manner.  My commission turn around time is loooong.  I have to sniff my clothes before wearing them because I can't remember if that hamper is clean or dirty.  It's okay.  Having a kid is freaking awesome.

Anyway, Dave and I just want anyone who is still lingering here to know that we are doing A-OK.  Dave is tattooing a goddamn shitstorm of awesomeness at Black Label Tattoos here in Duncan, BC, while simultaneously rocking his painting career.  He had some pieces hanging at Arcadia Contemporary this year.  I seriously can't take this guy's awesomeness.  He's also a completely egalitarian person to parent with.  And he finally has an excuse to buy that mega playdough set he's always wanted.

I have been shit busy with commissions and workshops, although to be honest, I haven't really done THAT many commissions.  Enough to keep me busy, but I'm slow.  I've been picking away at portrait projects for the past couple of years, for which I have been incredibly grateful.  I've been watching the gallery side of my career burble in spirals around the drain for the past couple of years and finally just smelt the last little belch of something rising up from the u-bend.  I am gallery free now and after years of AWOL artwork, damaged frames, unpaid shipping fees, dishonored contracts, and not one, but TWO gallerists doing jail time for shady dealings, it feels like going braless in August.  There were some good galleries, yes.  They were lovely.  It's thanks to their loveliness that a proper standard of measure was established to compare our lousy treatment to at the other places.  But I'm done with sending someone half a year's worth of work and waiting a year to find out the hard way if they're honest people.  In the meantime, while I wrap my head around this all, and revel in parenthood, I've been experimenting, learning, and scheming.  I've been digging deep, painting fast, making direct sales, and thinking about what's next.

Oh, and here's a painting: 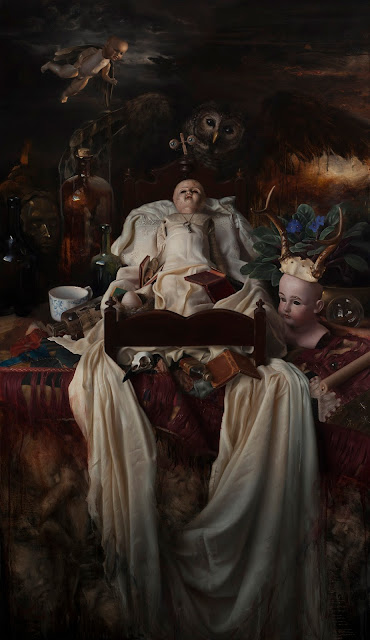 Yeah, so I painted this bugger over a long period of time.  I started before I got pregnant in 2015 and finished it up at the beginning of 2017.  But man, this was a beast to photograph.  But the ARC salon is one of those handy deadlines that always wind up making me haul ass to photograph anything I was avoiding.  Here it is in despeckled glory.

It's called "Insomnia."  Because when artists can't sleep, they play with dolls and dead owls in the middle of the night.  Leading up to pregnancy, and then during pregnancy, my anxiety took off and I couldn't sleep.  At one point one of my maternity doctors who was trying to help me with it found out I was an artist and she lit up and said, "Oh, so does that mean you can, like, paint your feelings to help you work through this?"  I dramatically rolled my eyes and explained condescendingly that I am a traditional realist oil painter and I don't paint my feelings thank you very much.  Then I went home and got back to painting, and realized that I was painting a goddamned eyeless doll in a bed.

I rolled with it, and I added an owl, and a flying angel doll, and a bunch of fetal monsters under the bed, taken from our 3D ultrasound.  I painted my feelings like no one has painted their feelings before.  I'm sorry, maternity doctor.

I'd love to do a few posts chronicling the progress of this painting.  We'll see how this goes.  I have to go sniff some laundry before folding it.
Posted by Kate Stone at 8:59 PM