I've been doing a lot of this lately:

...because last week I received some fantastic news: my recent painting, "Poppet," will be traveling to Atlanta this year as a finalist in the Portrait Society of America competition! 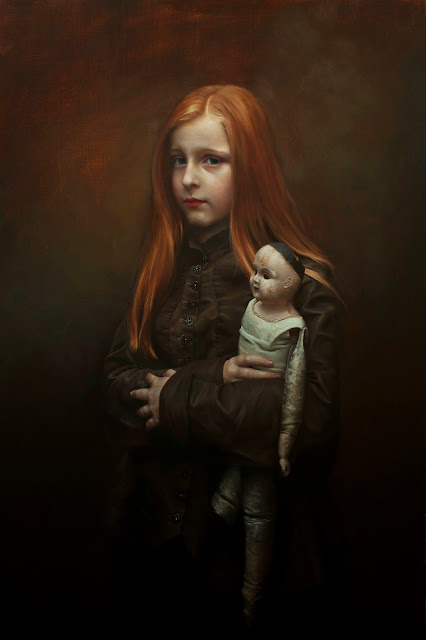 Incidentally, "Poppet" features the same model that appeared in my last PSoA finalist painting.  Maddie is my blue ribbon model.  It's funny to compare how different the colour fields in these two paintings are.  Maddie's hair has darkened a bit in the past two years, but I went ahead an exaggerated the reddish notes in there too. 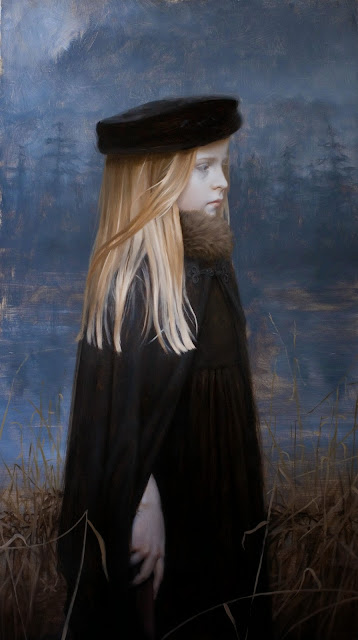 Today I pick up the frame for the painting and tomorrow I will build a crate.  The journey to Atlanta is long and FedEx is dysfunctional, so I will need a head start of several weeks to ensure my painting arrives in time.

Like I usually do, I took a gazillion photos while I was working.  Below is the work in progress. 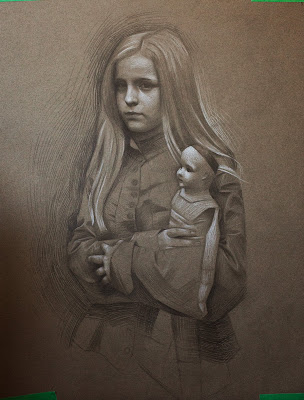 As usual, I started out with a drawing to work out my composition.  This time I used graphite and white chalk.  The graphite was a real struggle on the grey paper, and in this shot the darkest darks are a bit reflective.  Maddie is wearing a fantastic, military inspired silk blouse from Victorian times and the empty-eyed doll is straight from your worst nightmares.  I can't put the original reference photos online (I don't have permission from Maddie's parents) but in them Maddie is far more upright.  I stooped her over, head forward and arms moved in.  The difference is subtle, but the result is a pose that has more tension.  I was thinking about Lucas Cranach the Elder's beautiful princess portraits when I was doing this.  You know how he always forces a lovely slouch into his sitters? 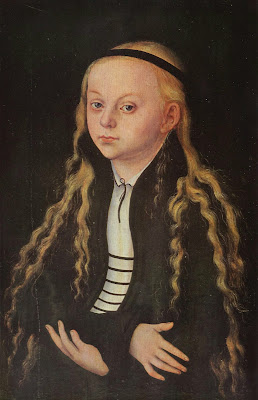 "Portrait of a Young Girl," Lucas Cranach the Elder
The next step was a vellum colour study. 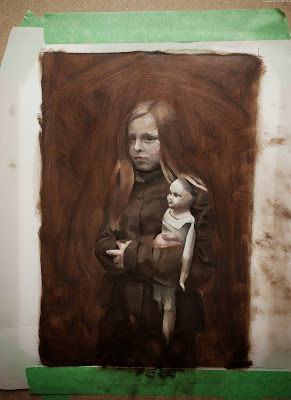 I knew I wanted a dark, warm painting.  I hanker after simplicity and at this early stage I really wanted to get away with a runny umber wash background.

Next, a head study.  This took a couple of passes and has a rougher finish than my normal work. 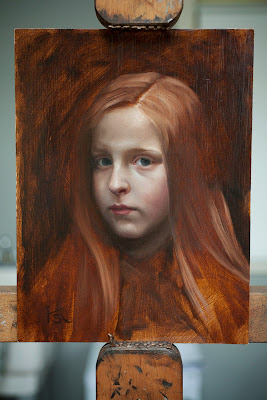 After all that prep work, it's time to finally start having fun.  Confident in my colours, I dived right in.  After toning the panel with umber and transferring my drawing, I started cherry picking all the fun parts. 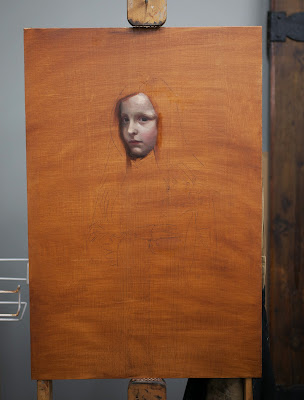 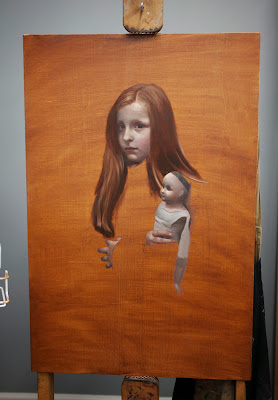 Some people have asked me if this is window shading (also known as "tiling," it's an approach whereby the entire painting is brought to a finish piece by piece).  I'm definitely not a window shade painter.  I believe in working all elements of a painting to a finish together, leaving room for serious revision if necessary.  I would have massed in the background and the coat first, but I wanted to have a transparent effect in those areas, for a change.  Everything that is painted here so far is still a pass or two away from being finished.  I like to build up accuracy, and texture, stage by stage. 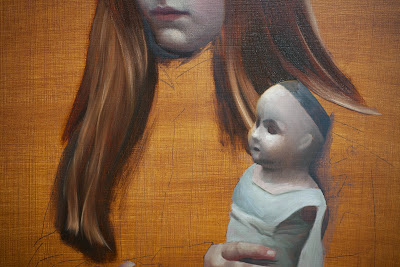 The hair, however, was taken to a near finish.  I couldn't resist playing with transparency here too, and multiple passes would have killed the effect.  In fact, this whole painting was a flirtation with transparency, umber, and, as you will see later on, Velazquez Medium.

I finally felt ready to lay in the background.  Backgrounds are hard for me.  They seem too simple, so I begin to over think them.  And yet, if I intentionally under think them, they end up being rotten.  I laid one down, hated it, and wiped it.  Part of the problem was that my umbers (Cyprus Umber Dark, French Umber, Cyprus Umber Warm) were drying so rapidly that by the time I had finished laying in the background, the paint I had laid down first was already sinking in.  It was impossible to work the background as a whole. 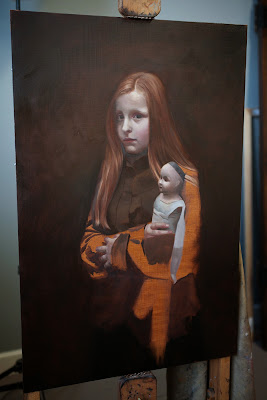 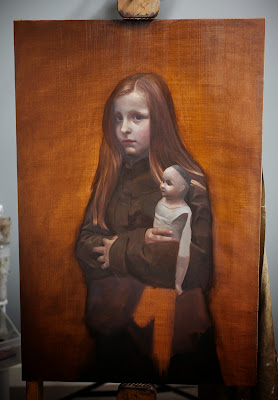 A couple days later I went back and LOADED my paint up with linseed oil.  This time the paint stayed glossy and true to value and I had a large window of time in which to work it, go make myself some coffee, come back, hem and haw, and rework it some more.  The trick was to introduce some green into the background, which, incidentally, was the exact solution I used in Huntsman and Herdsman.  And it was only at this point that I realized I had lapsed into the same colour field as that other painting.  So much for a bold new direction. 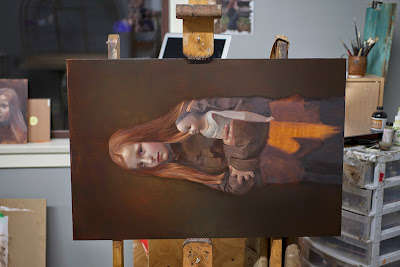 With the background dry and safe from the heel of my hand, I went into the face for a second pass.  I start off by laying in broad sweeps of colour, and then refining. 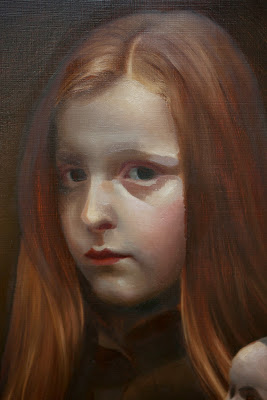 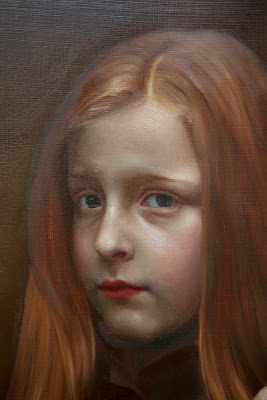 The eyes above aren't great, but I try to leave them for the very final pass.  By then things have gelled in my head and they come easily.  I figure it's twice as much work to nail the eyes in the second pass as it is in the third pass, so I just do what comes naturally.

Remember how I said I got all flirty with Velazquez Medium?  I haven't used it much in the past.  Usually I put a big dollop of Impasto Medium on my palette and I use that to beef up my lights when I want an impasto.  However, since I've become an unofficial Nat Pig spokesperson and field emails every week asking me about their various products, I felt inspired to give Velazquez Medium another whirl after a blog reader had emailed me with questions that I couldn't answer.  Velazquez Medium and Impasto Medium are very similar.  Both act like collagen injections in your paint, but, Velazquez has a stringy, goopy consistency to it.  I wasn't expecting to find a huge difference in the handling, by the time it had been mixed into my paint, but there was a distinct personality to it after all.  It drags out really beautifully and tacks up on itself nicely.  Plus, since it's stringy, you can make the most incredible filament-like highlights.  You'll see what I mean in my buttons down below.  At the moment I have a preference for Velazquez medium, but Impasto Medium is still a totally awesome product.  In fact, I can see how some people might get frustrated by using Velazquez medium for the wrong application.  I was using it to pick out the highlights in a model's eyes the other day and the paint just wanted to act like a piece of string.  All my highlights were noodle-like instead of perfect pin-pricks, so I can see myself keeping Impasto Medium handy.

Below is the result of a glorious play day with Velazquez medium.  Know this about me: I have been struggling for YEARS to paint with body.  It was so thrilling to paint this. 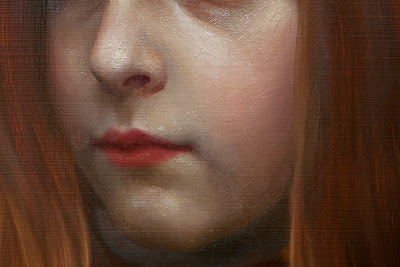 The doll presented an opportunity for more fun with Velazquez medium: And finally, that silk blouse.  There was no way around putting butt in chair and working at it bit by bit, super slowly, with a good audiobook in the background. 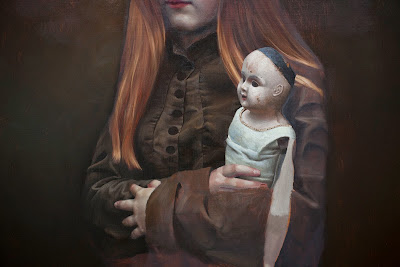 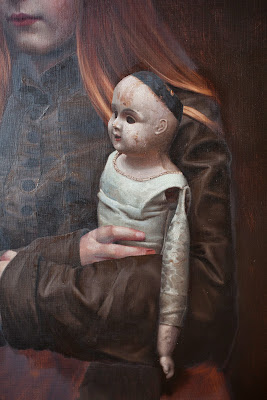 I warned you about the buttons.  This was the very last thing I did on this painting and it was that last little detail that made it all come together.  The little highlights on the buttons are brought to you by Velazquez Medium.  If you enlarge the image you can see the stringiness of the paint and how it adds a glittery effect to the highlights.  Yum. 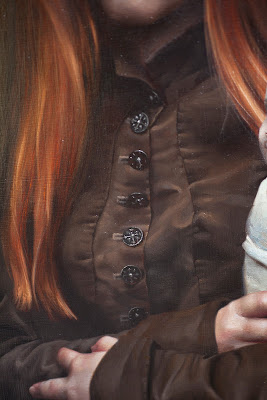 A couple of close ups: 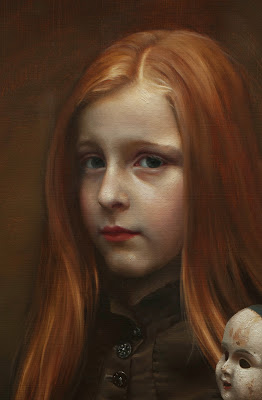 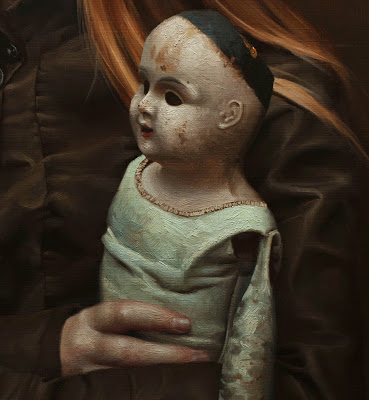 Why is the painting called "Poppet"?  There's no complicated back story or poetic inspiration this time.  Maddie is growing up quickly and I wanted to get in at least one more painting of her as a child.  Soon she will start looking teenager-ish, egads.  "Poppet" is a term of endearment for a small child, and at one point meant a small doll or effigy resembling human form.  From it we get the word "puppet."  The well-loved doll in this painting is ratty, worn out, and on it's last legs.  It will soon be time to put it aside.

Email ThisBlogThis!Share to TwitterShare to FacebookShare to Pinterest
Labels: Bragging, Work in Progress