Panels that will blow your face off

I have had quite a lot of inquiries about how I make my panels, so I thought I would give some insight into the process.

First of all, it's important to get past the romantic images we have in our heads about being an artist.  This includes drinking absinthe, drawing Moulin Rouge hookers, wearing a beret, dying in a garret from cystic syphillis...and painting on stretched linen.  Did you know that important oil paintings were all done on panels back in the very beginning, and that stretched linen as a support was a bit of newfangled material at one time?  So don't use linen just because it seems authentic.  Go to a museum and compare the paintings that were done on linen with those done on panel.  Panel always wins, hands down.  Linen is a fragile support--it is easily punctured and torn.  Linen is also a very absorbent material too (it's often used in tea towels) and it will expand and contract with available atmospheric moisture.  This expansion and contraction in the support will create tension in the paint layers, leading to cracking and delamination.  Also, if you paint on linen, at some point some asshole will take your canvas off its stretcher bars and roll it up, causing more cracking.

That said, I like painting on linen.  I rely on the weave to add texture and grain to my paintings.  So my dilemma was to create an ideal support that incorporated linen, but stabilized it as a panel.  My three big tasks were to find the ideal linen, the perfect panel, and the right glue.

I used Claessens oil primed linen for a very long time.  I liked the texture of it, but later discovered it was Zinc primed.  Pretty much Zinc is the baby bird of priming: it looks adorable but doesn't stand up to blunt force trauma.  Besides, it cracks when exposed to temperature fluctuations.   I eventually found New Traditions Art Panels and New York Central Art Supply.   They are some of the very few manufacturers that use lead priming.  Lead is far more flexible and durable than both Titanium and Zinc.  The only downside was the time lag between placing an order for a custom panel, and receiving it in the mail up here in Canada.  I simply can't wait four weeks for a panel when my ADD wants it now.  The good news is that they sell rolls of lead primed linen through their L series (L600, L280, and L219) so you can make your own panels to size.  I typically steer towards the L219 as I like a little tooth to my linen.  Bam, first problem solved.

Problem number two: supports.  Wood of course is what most people default to, including myself for awhile.  This is where having a woodshop would have been helpful when I lived in Toronto.  Instead I would go to Home Depot, watch them butcher the wood I asked them to cut, and as a result I would just kind of leave it in the plumbing aisle and run away.  The problem with these big box hardware stores is that they only offer fairly cheap crappy wood.  Fiberboard is terrible and is pretty much like fancy cardboard.  The birch ply they carry is really just meant for sub-floors and has too many inconsistencies throughout the layers.  It helps to find an outlet the sells wood to professional carpenters.  I found the only usable thing was baltic birch ply that is used for cabinets, which can only be found at specialty wood stores and is quite pricey.  It's still not ideal, though.  The edges can splinter and there's always a knot in the wood right where you don't want it.  Plus, it can still warp.

Then...a solution.  What have we learned from every Planet of the Apes movie?  That's right, roadsigns always survive an apocalypse.  And what are road sign made of...Dibond.  Dibond is a type of flat panel that consists of two thin aluminum sheets bonded to a non-aluminum core. It is inert, does not expand and contract like wood, is lightweight, does not absorb moisture, is easy to cut on any tablesaw, and is more or less puncture proof.  It is also coated and can even be painted on directly.  Bam, problem solved.  Dibond can be found at sign makers shops and industrial plastics stores at a price comparable to high quality plywood. 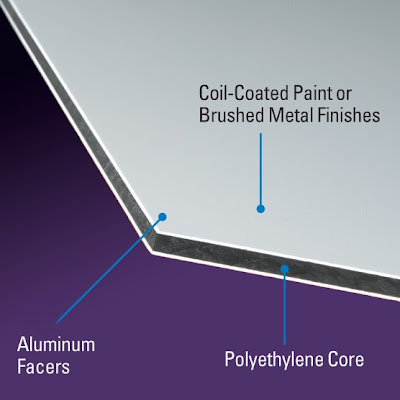 Problem number three: the glue.  I have tried many pH neutral glues, from Miracle Muck to Lineco.  In order to adhere linen to panel, you need a brayer and a crap load of bricks, books, or one dead elephant.  I have had about an 80 percent success rate with these, which meant a lot of ruined panels and swearing.  In addition, I had to wait overnight to find out if they even came out alright.

Solution, Beva 371 2.5mm Film.  The film, which is inert, comes in a roll and is activated with heat (around 160 F,  71 C for my Canadian followers, or room temperature for people who live in the desert).   However, a dry mounting press is required to combine the adhesive, dibond, and linen together.  You can pick up a mounting press for as low as a couple hundred bucks on craigslist.  Any photo store might have an old one kicking around.  It takes only about 5 minutes for the glue to adhere using the press.  They can also be used to make Panini's.

NOTE:  It is possible to make larger panels simply by pressing each half of the panel at a time. 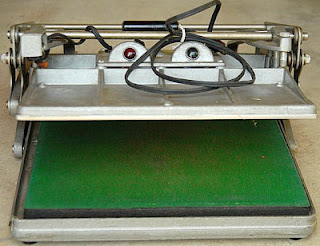 All my nerdy research has lead me to making panels in this way and I am not aware of a faster OR more archival method of panel preparation.  Also, a lot of this information I didn't steal from Julio and Candice when we went down to visit them in California....ok I stole it.
Posted by David Gluck at 10:35 PM

Email ThisBlogThis!Share to TwitterShare to FacebookShare to Pinterest
Labels: Tricks of the Trade